Guinea fowl or guinea hen are often just called guineas. These beautiful birds provide an excellent means of controlling pests as well as make great watch birds, sounding an alarm when something unfamiliar approaches. There have been stories about guineas even being used in junk yards in lieu of dogs to warn of invaders. However, because they can be loud, you'll want to check your local regulations to determine if guineas area allowed where you reside.

The helmeted guinea, pictured below, is the breed most typically found available for sale in feed stores. These birds are originally from semi-arid areas and do well with heat and don't require much water or food when they are allowed to free range.

They can live up to 15 years, but the average in a domesticated environment is closer to 7 years, with predation being the biggest reason for a shortened life. 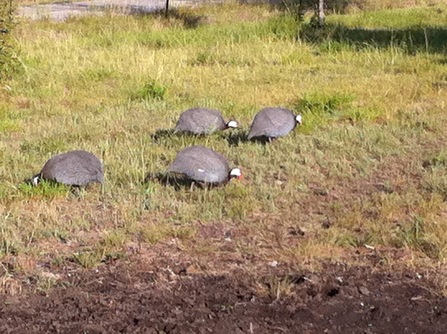 Guineas ridding the field of pests

In addition to be fantastic garden helpers by consuming insects, guineas are also renowned as "watch birds" that will help alert other birds to danger in the area.

​The eggs are delicious - although the hens will typically lay large clutches a couple of times a year instead of producing consistently throughout the year. Approximately 2 guinea eggs equals one large chicken hen egg. The eggs shells are much tougher than chicken eggs.

The Pearl Grey color is the original color of guinea fowl and the one most commonly seen. There is a pied version of the Pearl Grey that has a white chest, wing and sometimes in the back area. Pieds can be found mixed with other colors as well. There are also lavender, lite lavender, royal purple, coral blue, sky blue powder blue and slate, which are all varieties on the greys. As  more white is added to the breeding you see colors such as white, porcelain and opeline. There are also varieties that lean towards more brown such true brown, chocolate and bronze and then a mixture between grey and brown described as pewter. Many of these colors are very rare in the US.

Where to buy guineas

Purchasing birds
Guineas can be a bit more difficult to find than chickens, although their popularity is quickly increasing. The easiest way to raise guineas is to start them as babies, called keets. Otherwise you will have problems keeping your guineas at home and they will simply fly off to wheresoever they prefer. Keets  are rather fragile creatures - more so than chickens, so keet care instructions should be strictly followed.

You can find them in feed stores in the spring and summer. Another good option is to check your local paper and local online postings. Buying them online and having them shipped is possibly, although not recommended because the keets are deceiving fragile and may encounter complications from the shipping. 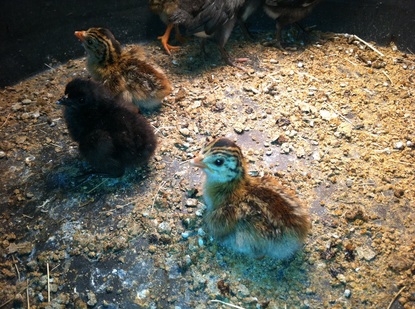 One of the most frequent questions about poultry of any species is how to tell males from females. It is very difficult to sex young guineas (those 12 to 52 weeks of age) because pullets (young females) and cockerels (young males) look exactly the same. When the guineas are older, there are two ways to tell them apart: 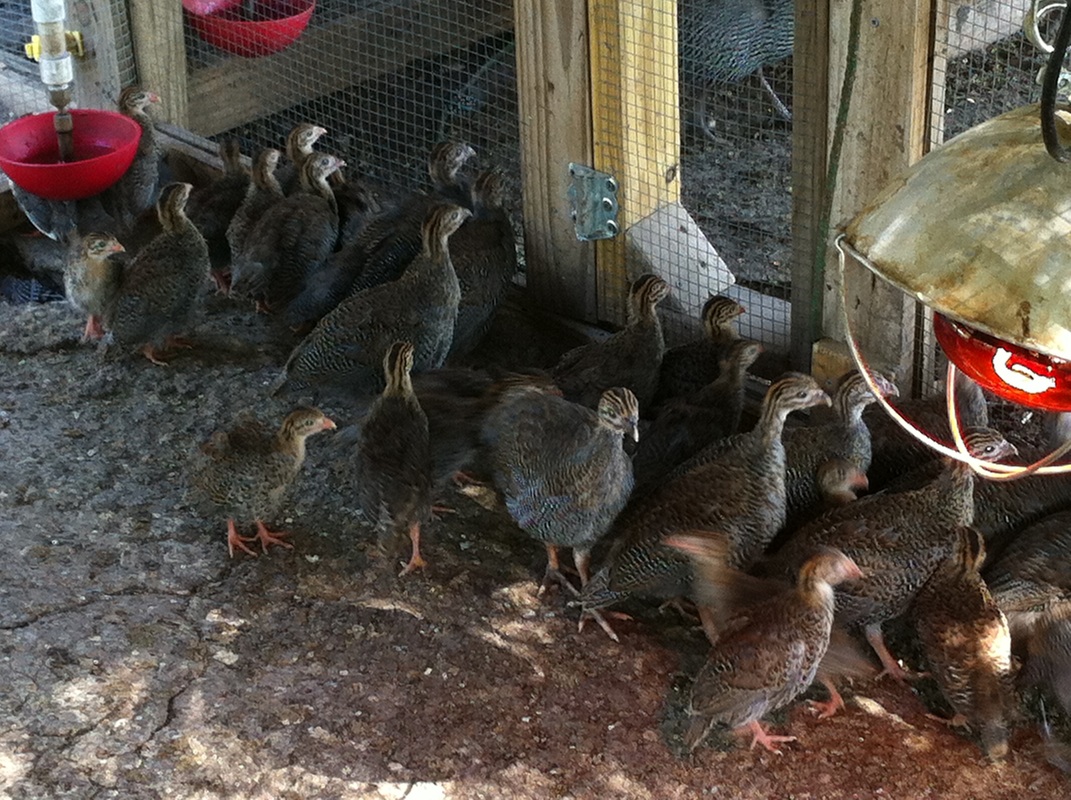 At his age is virtually impossible to tell the boys from the girls.

Clipping one of their wings is a good way to discourage roosting, but allow enough feathers that they can still get themselves over 4' fences and onto their roosts. Because their wings are clipped, roost should be placed 3 to 4 feet off the ground or "stair-stepped", so the birds can hop their way up to the highest desirable roost. More information about how to clip flying feathers can be found on the blog page.

Hawks, owls and other birds of prey are the biggest problems for guineas. When you are missing a bird, that's most likely the culprit. Birds of prey learn where to find an easy meal. Sadly, it's also been seen where hawks will simply take the heads off the birds so sport. When this happens, be immediately prepared to keep your birds housed for a week or two - or until you are confident the danger has passed.. Even turning them out while you are supervising them is not 100% effective.