For the safety and welfare for the goat itself, other goats, other animals such as pet dogs, and the human caretakers, it is highly recommended that goats have their horns removed. There are 3 options to remove horns.Of the 3 options, disbudding is far the most preferred remedy.

​The time to disbud a goat is between 3-7 days. Otherwise the buds will be difficult to terminate and a scur is more likely to occur, although it may occur anyhow. "Scurs" are partial horns and can take many shapes - either just a small bit or horn; a long horn that looks almost like a horn; if is often curly, but sometimes straight. Because of the higher testosterone levels of bucks, it is not uncommon to see them with scurs. ​

​The best way to determine if it is time to disbud kids is you are to feel a hard nub on its skull where the horns would grow. The hair pattern on the kid's head on the left worked perfectly to indicate where the buds are likely to appear. Do the job when it needs to be done, don't "save it up" for a convenient time. 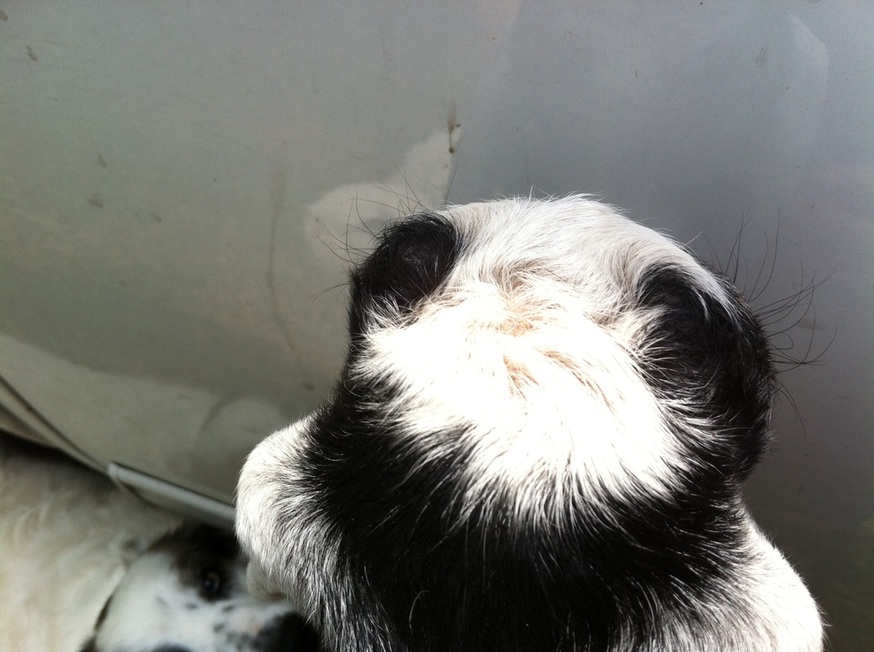 You can see the horn buds between to form on this one week old doeling.
Use a disbudding iron to disbud. Although disbudding can be done using caustic, also known as disbudding paste, don't do it.  Although it may seem more humane that a disbudding iron, it is not. Caustic can cause blindness and it extremely painful if it gets on other parts of the body.  If you are not comfortable disbudding on your own, check within your local goat community. There is often an experienced disbudder who will either do the job for you or train you at an economical price. If you decide to disbud on your own you will need an electric disbudding iron (available from a goat supply store), a kid holding box (shown at left) and an electric clippers to shave the bud area on kid's head to exposure the buds before using the iron. 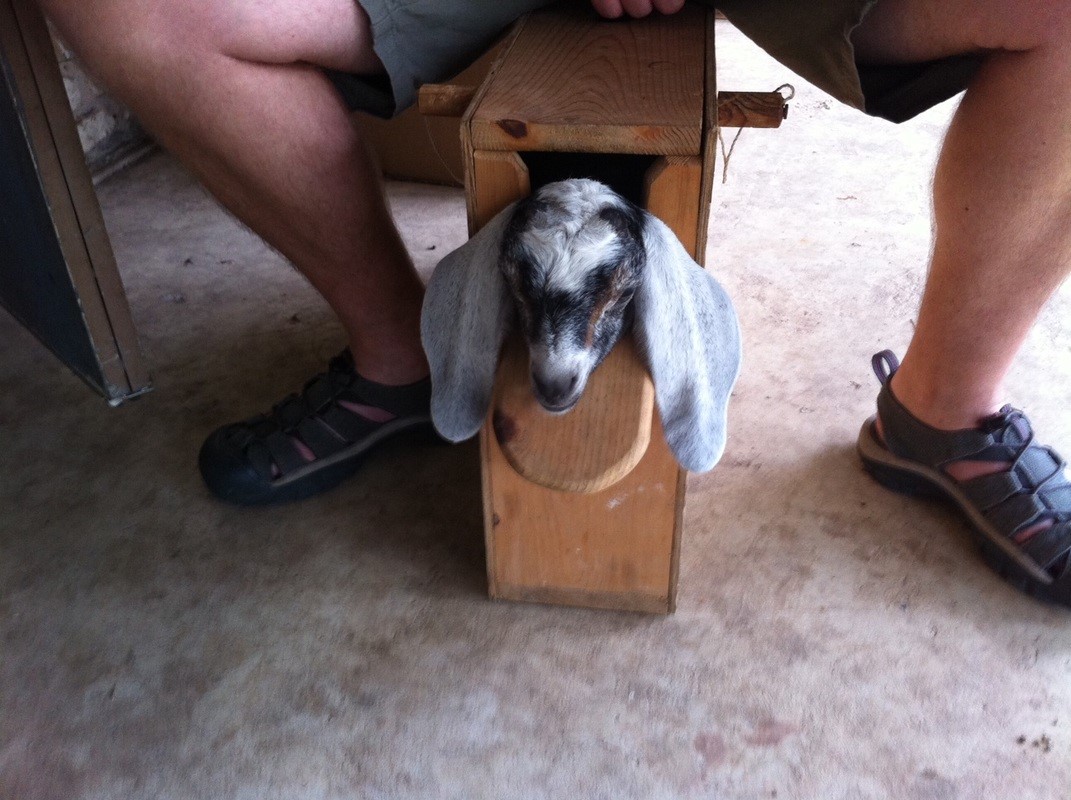 The kid is placed into a kid holding box.
​The kid holding box is a small box that can be constructed from 3/4" plywood or other similar wood, or you can purchase a box from one of the goat supply sources found online. If you decide to build your own, the dimensions are 18" high, 24" long and 5 " wide. It needs a lid to close down, generally using a hinge, and a notch cut out from which the kid will stick out its head. Some kids go in willingly, others fight, but it's much easier to use the box than to risk an accident by having someone solely hold the kid's head. The box is also useful when  tattooing.

Heat the iron well before placing the kid in the box and shaving the nubs. This will help reduce the time and anxiety for the kid. As assistant that can hold the goat firmly by the neck at this point is generally helpful. Place the iron firmly on the nub for 15 seconds rotating slowly with firm pressure. You are looking for a bright orange ring to appear, at which point you know you are done. If the ring is not achieved, you can wait a bit and then try again.

​Console the kid, and compose yourself while the iron heats up again, then do the other horn button. 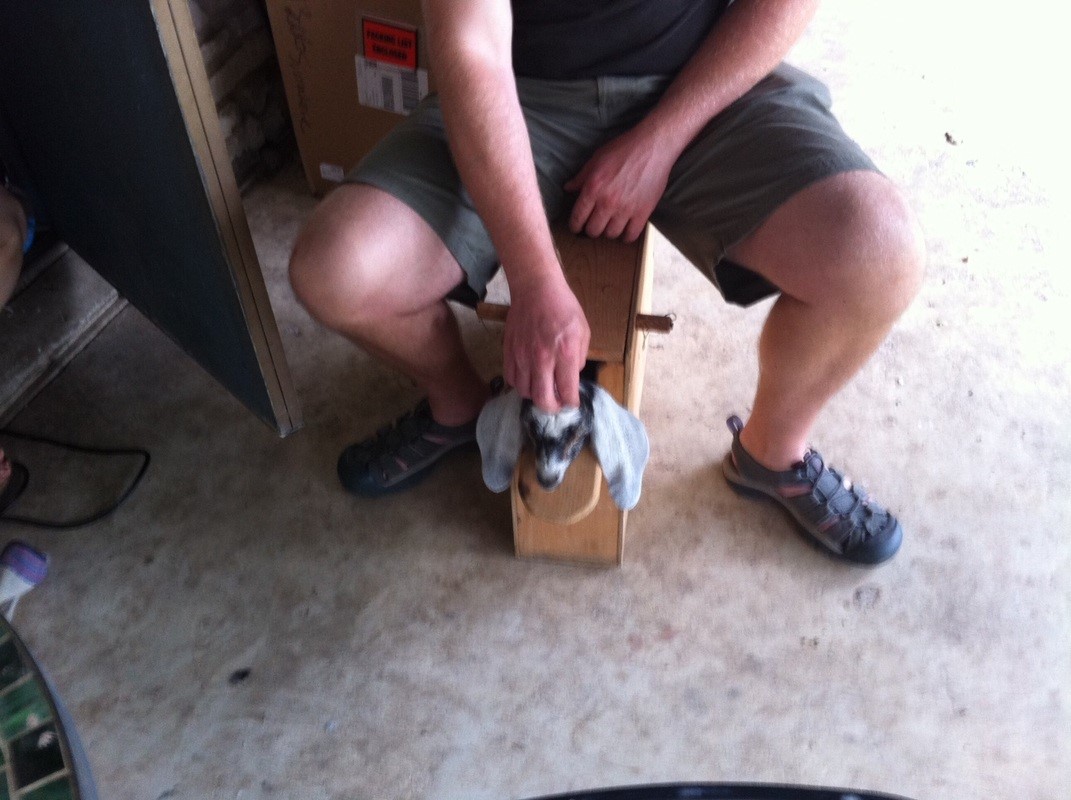 A consoling and careful rub is given to calm the kid.
When  you have completed the task, the nubs will appear as in the photo below. The burned nubs will eventually scab over and come off or get removed of as any normal scab would. When the scabs come off, there may be a bit of bleeding, but this is not of significant concern. If you are worried, iodine may be applied to help keep the area clean and free of infection. 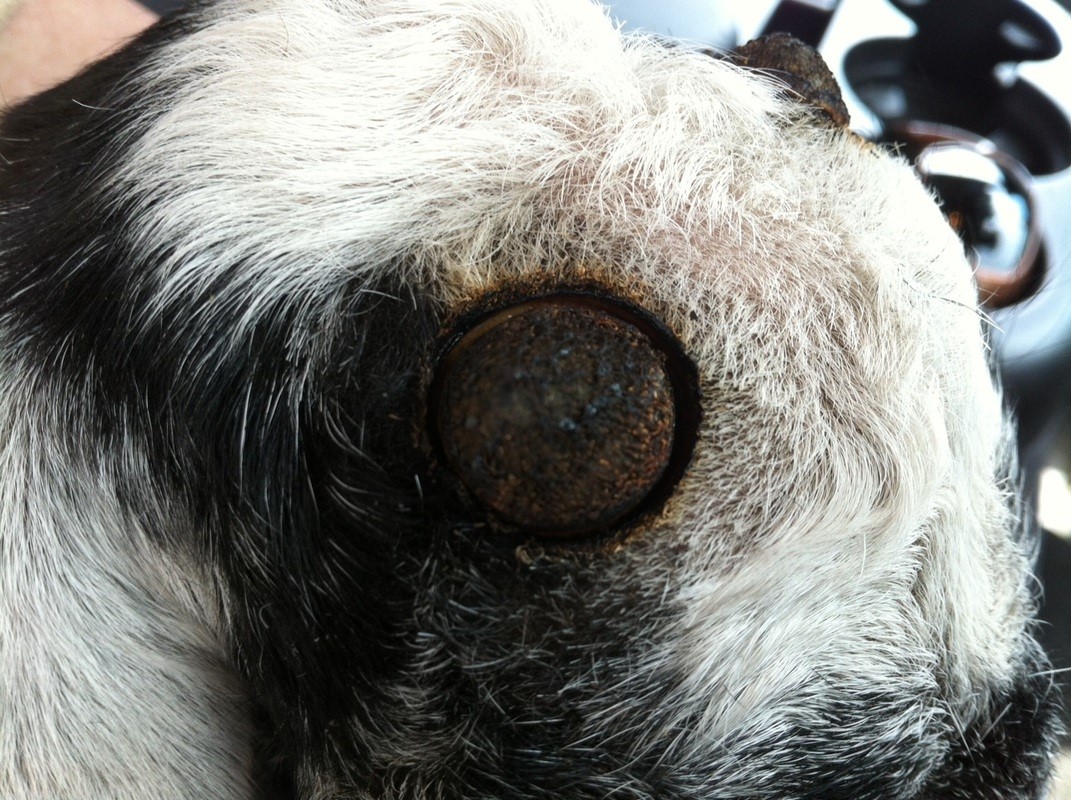 Once the entire process is over, offer the kid a bottle of warm milk and it will forget all about what just happened.

it is possible a scur will develop. If so, you can just keep an eye on it, as often they won't grow very large. If it becomes large enough to present a problem, you can take the goat to a vet who can remove the horn using a dehorning process. ​ 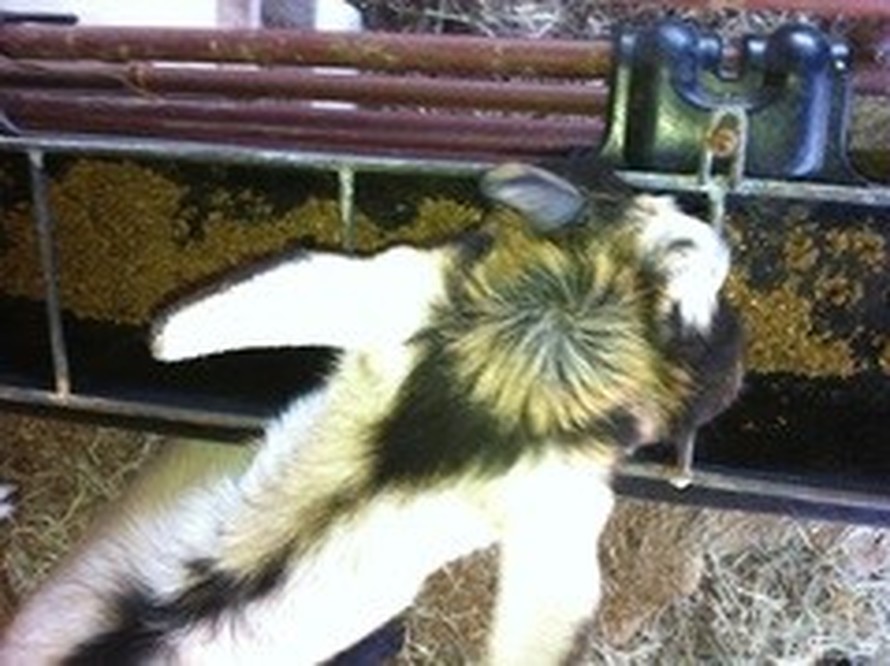 This Alpine doe developed a scur, but it remained small enough that it wasn't a problem.

Methods of castration for bucklings is a controversial subject. In most cases it is not recommended you try any of the alternatives available to amateurs unless you are an experienced goat owner who has been trained under the supervision of a knowledgeable practioner. Castration is generally best left to the veterinarians, particularly for bucklings over the age of two months.